Book your seat for
EPIC36 Powered by Intel now

EPIC.LAN is an independent community UK LAN Party featuring a great range of casual games and amateur esports tournaments. We run LAN parties from 32 players up to 750 around the UK as well as working closely with other gaming industry organisations such as EGX and ESL UK through our B2B services.

Book a ticket for our next event now to experience the awesome atmosphere and friendly community of EPIC.LAN.

About EPIC36 Powered by Intel

EPIC36 is a LAN based gaming event in the UK. It features a mixture of casual gaming, stage content and esports tournaments so whether you enjoy playing games for fun or want to be the next esports professional, there will be something for you. 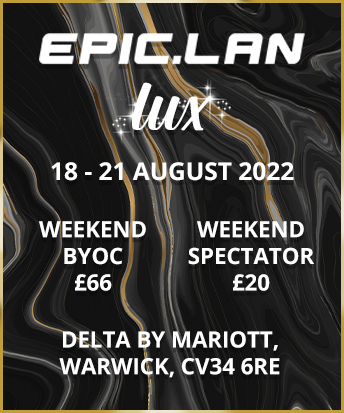 Over the last couple of weeks, it has become apparent that the tiny town of Kettering had literally no hotel rooms available over the EPIC36 weekend.

It seems that even though it's a good distance from Silverstone, the impact of the F1 GP spreads as far as Kettering which meant that anyone trying to book tickets from this point would not have been able to get accommodation in town and while some people are happy to camp, or sleep on the floor, we know from previous events that some 70%+ stay off site, so it left us with no choice other than to cancel the event, or move it.